It’s been a whole year since the last DrupalCampNW2012 and this years DrupalCampNW (appropriately titled DrupalCampNW2013) seems to have been a great success. This years camp was held in Manchester at The Studio and I was part of the committee of people who helped organise and run the event.

Over the course of the weekend there was a range of talented speakers covering differing issues around Drupal, open source technologies and user experience. The weekend consisted of a Friday business event, followed by a developer and site builder event on the Saturday and Sunday.

My main task during the event was making sure the volunteers we had there on the day knew what they were doing and when to do it. The trouble with organising and running a conference is that you are lucky if you get to see many of the sessions. I did, however, manage to see several sessions over the course of the weekend.

The Friday business day was not about Drupal specifically but instead focused at businesses who don’t currently use open source but wanted to know more about it. As a result we didn’t have any Drupal centric talks during the day and focused instead on open source technologies in general.

Whilst this was going on we had also booked a room at TechHub Manchester (just around the corner from the venue) so that a Drupal Sprint could be held. If you don’t know what this means, the word ‘sprint' comes from agile practices and involves people meeting up and working together on a certain task. The idea is that jobs can be done on the Drupal 8 issue queue, but module and theme development is also a big part of it. As everyone was busy with the main event Emma Karayiannis (@emma_maria88) stepped forward and ran the sprint on behalf of the group. By all accounts the sprint was a success, so thanks to Emma for running that and for anyone who came along. 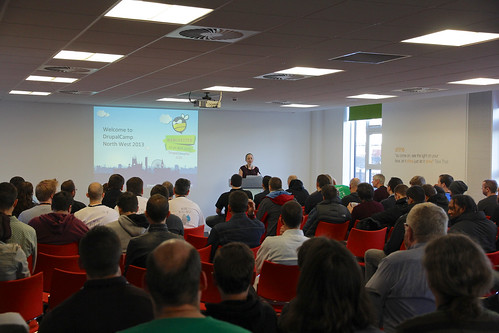 We had two keynotes on the Friday, the first coming from Paul Hornby, Head of commerce at Shop Direct. Paul talked about how Shop Direct (originally a catalogue retailer) changed their customer base from offline to almost completely online. This was a fascinating look into how mobile technologies were only really thought about when they looked at their analytics and noticed an increasing number of people were trying to purchase using mobiles. Since then they have introduced full mobiles sites and even applications.

The next keynote was Mark Taylor, CEO of Sirius, talking about the future of open source. This not only looked into open source technologies but also open data and how it is becoming more important in transparency and democracy.

The only other talk I managed to catch after this was Chris Jones, Creative Director at Blueleaf, who talked about the Joy of UX. This was a talk about how important user interfaces are to the sites that we build and how they can be neglected at times. I quite liked that Chris introduced Douglas Adams and talked about how he was years ahead of his time with regards to computers and their usage. I even had a quick chat with Chris after his talk about Douglas Adams and how he talked about data visualisation and in the book Dirk Gently's Holistic Detective Agency.

Finishing for the day we got everything ready for the next day and headed off to the pub where we met up with the people in the sprint to hear about what they had got up to during the day.

Saturday started with registration, which seemed to go without a hitch.

The first keynote of the day was SensioLabs, who talked about what Drupal 8 had in store. They approached this session from a Synfony background and so told the story of how Synfony came about and how it started to get included into Drupal 8. What was also interesting is that they talked about the community and also pointed out some members of that community who are integral to the success of Synfony.

After this we had another keynote from Lewis Nyman, who talked about some the great improvements in usability that Drupal 8 was bringing on board and how they would help the user perception of the system.

The next session (after a quick coffee break) was Katherine Cory, who presented a talk called The Forgotten User. Katherine actually approached me some 10 minutes before the session began and said that she was having trouble getting her presentation to appear. I went into the room and had a quick look and was a bit stuck as to what was going on so I called for some help. After a few minutes we had at least 5 people in the room trying all sorts of things to get the presentation to run, with not much luck. So I went out into the main area (where everyone was having coffee) and asked the first person I saw if they had the same version of Keynote that Katherine had, and could we use their machine. A lovely chap called Cameron came to our rescue and we were able to get Katherine started on her talk only a couple of minutes late. I could see poor Katherine getting more and more nervous as time ticked away but she started the talk only a little bit nervous and soon settled into it and gave a really inspiring talk on how to communicate with computer (or web) illiterate people.

After this the next session I was in I was actually running. We had arranged previously to stream a presentation by Jeffrey A. jam McGuire from DrupalCamp Vienna and my computer was to be used as the basis of this. The presentation was really good and the actual communication with Vienna went ok (for the most part) with only a couple of breaks in the transmission. This was perhaps the most stressful 40 minutes of my weekend (even with me giving a talk) as every time Jam paused I leaned forward in case I need to reconnect my laptop to the stream. Looking back it might have been a good idea to cover one or two things before doing this, like making sure that we had a wired connection and turning off our camera for the duration of the talk, but lessons were leant!

Right after this we had the final session of the day before the social (and the free beer). As I was in the room I put myself up for speaker shadow and helped get Matt Smith set up for his talk Omega is Dead, Long Live Omega. I have to admit that I have seen this (or at least a variant) of this talk at one of our NWDUG meetings. However, Matt had changed things a little and it was interesting to see the new and different things in Omega4.

The social this year was at the same venue that we held last years social, downstairs at Missoula Bar in Deansgate Locks. It was good to see a lot of people there, especially the organising committee, who were able to relax a little as the weekend was mostly complete. I had a good talk with several people about the state of Drupal, the community, programming, meet up groups and live streaming from Vienna. 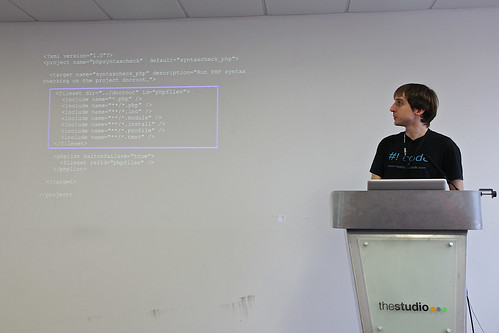 Sunday stated for me with my own session, called Getting Started With Jenkins And Drupal. Despite me practicing this talk lots of times I still managed to rush through it on the day and ended up finishing quite early. Overall, I think the talk went ok. I’m always highly self-critical, but there were a few things I think I could improve on. After this I relaxed a little and sat in Matt Galleys talk about Improving Drupal Performance. This was an introduction into the sorts of things that site builders should be doing in order to improve Drupal performance. Matt mentioned Varnish and some more high end technologies, but also mentioned some quick fixed like turning on anonymous caching or using the boost module.

The penultimate sessions of the day was Web Scale and Drupal on a Shoestring with Adam Evans. This was a case study of the site Golfandcourse.com, which was really struggling before some simple fixes were implemented in order ameliorate the difficulties the site was having. Adam gave some really good tips and strategies in identifying the cause of issues and putting things in place to fix them. This kind of led on nicely from Matt Galley’s talk in that Adam mentioned some of the same things, but also had some more detailed items (specific to golfandcourse.com) that could be a problem on many other sites.

The last session I was monitoring was with fellow DrupalCampNW2013 committee member Paul Woodhead and his talk, Sprints and Ladders. This was a talk about getting involved in the Drupal community and learning how to contribute to Drupal. This is one of those ‘feel good’ talks that makes you want to get involved in contributing to Drupal. Unfortunately I was slightly late to this talk as I was trying to make sure Greg Harvey could give his talk in the other room. After a bit of adapter juggling and cable switching I lent him my laptop for the session and he gave his presentation on that.

The final session was a wrap up and prize giving session. Stephanie Hosny had been doing these sessions for the weekend, but I had said that I wanted to run at least one. As it turns out I was only able to give the final closing session, which involved giving out prizes and saying thank you to the many people who had contributed to the event. This was way outside my comfort level but I think I handled it quite well. My name was also picked out of the bucket (not by me I hasten to add!) to win a PHPStorm licence, which was nice.

This was the end of a very enjoyable DrupalCampNW2013. It was great to see an event you have spent months planning fitting together and running smoothly, but also to see everyone else enjoying it as well. It was also great to catch up with some familiar faces and to meet a few new people.

I thought I would devote a section at the end of this post to say thanks to some of the people involved in the camp. So here it is (and I'm sure I've missed somebody here!).